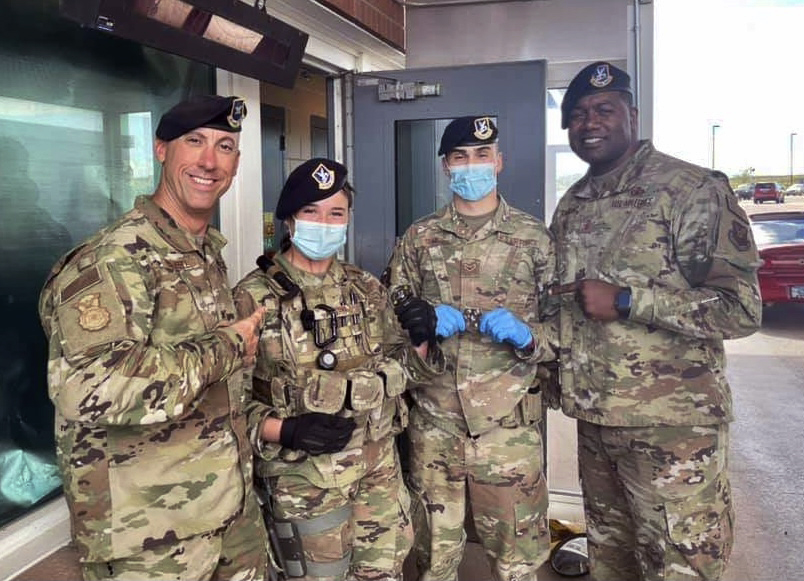 Airman Suzanne Pedro and Airman 1st Class Frank Shaw, both from the 90th Security Forces Squadron, pose with Col. Damian Schlussel (left), 90th Security Forces Group commander, and Chief Master Sgt. Charles Flanagain (right), 90 SFG chief enlisted manager, for a photo on F.E. Warren Air Force Base, Wyoming, July 7, 2021. The Airmen were coined by their leadership in recognition of excellence while performing their duties. Their actions in defending the base directly contributed to the capture of an individual with active arrest warrants and the recovery of a missing child. (Courtesy photo)

Airman Suzanne Pedro, an Installation Entry Controller from the 90th Security Forces Squadron, was recently recognized by wing leadership for actions which led to the capture of an individual with active warrants and a missing child here June 28, 2021.

A man drove up to the base gate and handed Amn Pedro, who was assigned to defend that gate, an unusual form of identification. When the man and child in the vehicle refused to make eye contact, the Airman began to suspect something was amiss.

“I had a feeling something wasn’t right,” said Pedro. “Neither the man or the child looked at me while I scanned the ID. When it flashed red for warrants, my heart began to race.”

After quietly alerting her supervisors and wingmen on duty at the gate, Amn Pedro directed the vehicle out of the line of traffic to prevent the individual from fleeing. Airman 1st Class Frank Shaw, 90 SFS, relayed information to the base defense operations center, which verified the warrants were active and contacted local law enforcement to inform them of the situation.

“We were told of a weapon in the car, so my heart was racing, but I wasn’t nervous,” said Pedro. “My main concern was keeping the child distracted and keeping him comfortable and happy.”

Although the investigation is ongoing, the Airmen have been told the child had been missing from his biological mother since December of 2020.

Pedro and Shaw were recognized by multiple levels of leadership for their textbook actions.

“Airman Pedro exemplifies what it means to be a Defender,” said Maj Keil Luber, 90 SFS commander. “While not yet qualified on her position, she followed her instincts and training, directly contributing to the capture of a wanted criminal and the recovery of a missing child.”

While both Airmen remain humble about their actions, Pedro expressed excitement about her coming years in the military.

“I’ve wanted to be a police officer as long as I can remember,” said Pedro. “To have only been in the Air Force for 10 months and get this experience that most haven’t gotten in their whole careers – it’s been amazing. I am thankful for everyone on my flight who has helped teach me, and I’m also thankful to my parents for supporting me in my dreams.”