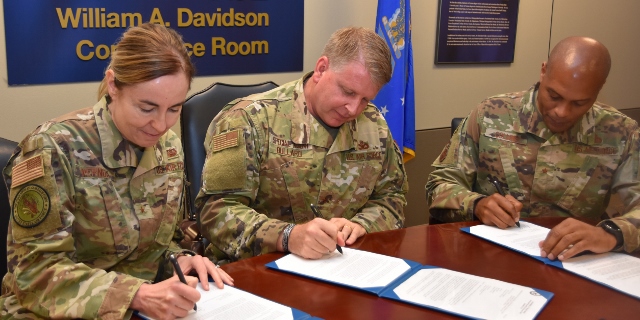 Teamwork has been a staple for the Office of Special Investigations since its inception in 1948. Now, that foundational concept has progressed significantly on two fronts.

A second major signing that day, between OSI and SF, initiated the formation of Joint Base Enforcement Teams (JBETs).

“Both pertain to how we run and manage investigations,” said OSI Commander, Brig. Gen. Terry L. Bullard. “As you know, we’re constantly seeking ways to improve our processes, and to ensure that OSI is focused on the types of investigations that only we can tackle.”

The CIP agreement formally commits each organization to improving transparency and consistency within its processes. Collectively, their goal is to leverage respective areas of expertise to deliver professional, timely, and legally sound investigation and adjudication of military justice actions.

“The signing of this memorandum memorializes the long-standing relationship and cooperation between the Judge Advocate and law enforcement communities within the Department of the Air Force,” said Brig. Gen. Rebecca R. Vernon, Director, Military Justice and Discipline. “The strengthening of these bonds and our commitment to even greater collaboration is emblematic of the commitment our investigators, judge advocates, Victim and Witness Assistance Program personnel, paralegals and support staff, have to both victim care and the pursuit of justice.”

The CIP memorandum outlines the composition of the CIP team, which includes key OSI, JA, and SF members, and prescribes the notification processes associated with the activation of a CIP team. The memo also hones steps already utilized by OSI special agents working cases.

Meanwhile, the JBET concept is based largely on feedback received from OSI special agents in the field, which helped identify potential gaps in criminal and fraud investigative coverage for Department of the Air Force wings. OSI and SF agree that creating JBET is the way to optimize their investigative capabilities.

“Security Forces and the Office of Special Investigations continue to work together to accomplish the mission at home and abroad,” said Brig. Gen. Roy W. Collins, Director of Security Forces, Deputy Chief of Staff, Logistics, Engineering and Force Protection. “The partnership memorandum demonstrates how the Security Forces Squadrons and OSI detachments support each other. Through this effort, Defenders will continue to perform law and order operations, conduct investigations, and keep our installations safe.”

On Pay and Allowance Matters: OSI will defer to SF, except in cases with senior subjects, or when there is a connection to another OSI investigation. OSI will coordinate closely with SF when an allegation involves large-scale manipulation or a financial management system or process, or when there is potential activity.

On Drug Offenses: SF and OSI will conduct joint interviews of drug violation suspects to determine the lead investigative agency, with OSI focusing on drug distribution and manufacturing.

General Bullard reflected on the signings from OSI’s perspective.

“Our agreements solidify our commitment to operating in lockstep with our closest law enforcement and military justice partners,” said the Commander, “thereby helping to ensure the best possible outcomes for the Department of the Air Force and those we serve.”