Tech. Sgt. Ryan Fontaine, of the 219th Security Forces Squadron, unexpectedly found himself in the position to help save the life of a 91-year-old Williston, N.D., woman as he drove south on U.S. Highway 83 just before midnight on Thanksgiving, November 28, 2019, near Max N.D.

Fontaine was descending a hill on the icy four-lane highway near mile marker 179 when he noticed flashing lights several yards off the road on the west side to his right, and two vehicles on the shoulder. 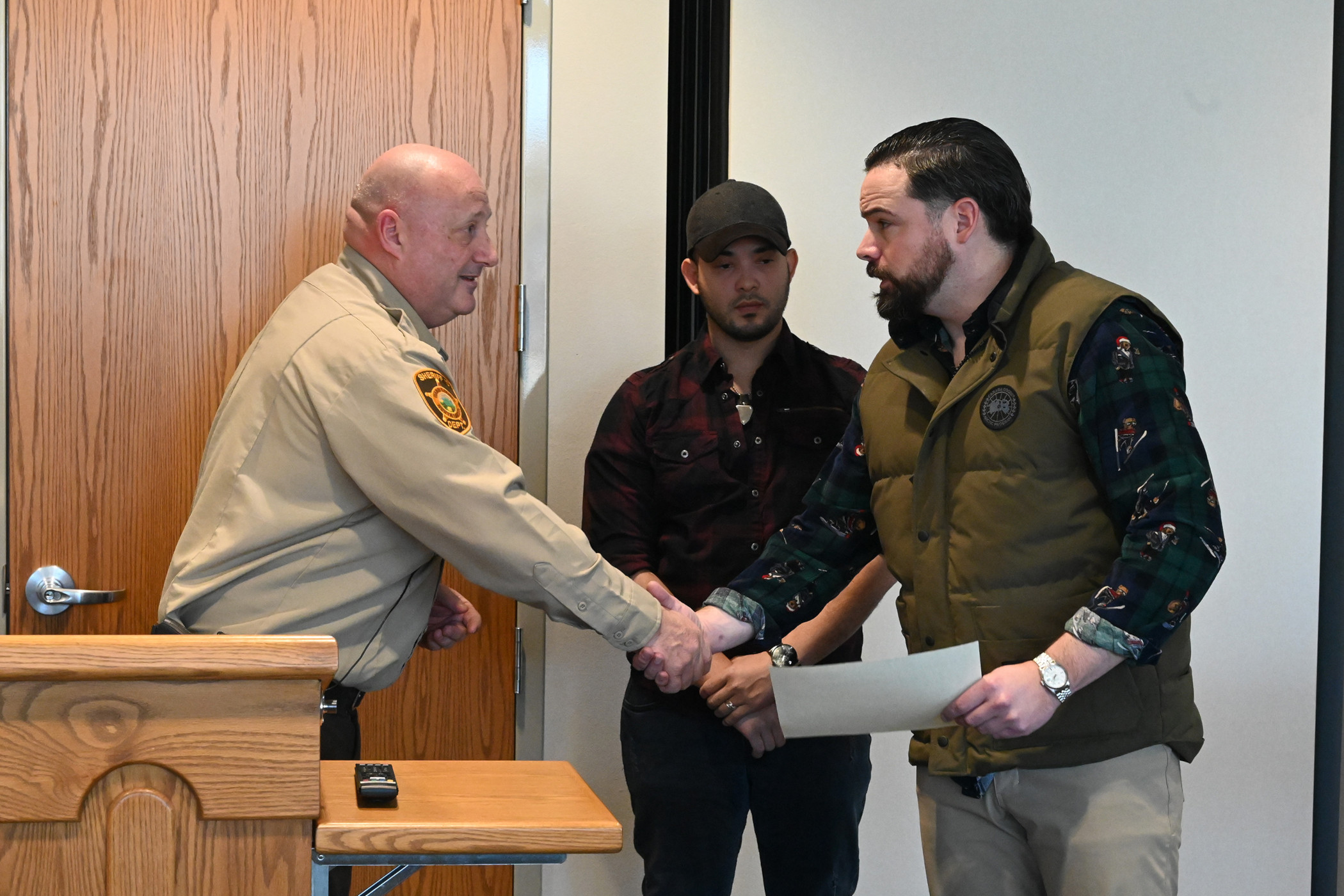 Ward County Sheriff Bob Roed, left, shakes hands with Tech. Sgt. Ryan Fontaine, of the 219th Security Forces Squadron, as Roed presents Fontaine with a certificate of courage and recognition coin during a ceremony at the Ward County Sheriff’s administration building Minot, N.D., Jan. 3, 2020. Fontaine is an off-duty, drill status North Dakota Air National Guard member that is being recognized for helping to save the life of a 91 year-old woman who was trapped in an ambulance that slid off U.S. Highway 83 and was sinking into a frozen pond the evening of Nov. 28, 2019. Woody Perez-Valdez, photo center, is also being recognized for his part in the rescue. (U.S. Air National Guard photo by David H. Lipp)

He stopped to investigate and noticed the flashing lights on an ambulance that was half-submerged in the frozen slough next to the road.

The three-person crew that had been in the ambulance escaped by breaking a side cab window with an ice scraper.  The cab of the ambulance was twisted due to the accident and passage was not possible from the back end to the front broken-out window.  The patient, Dolores Paulson, of Williston, N.D., was trapped inside the flooding ambulance.

The driver of one of the vehicles parked on the shoulder of the road was Kathy Paulson, the daughter of Dolores. Kathy, also from Williston, had been following the ambulance as it transported her mother from Williston to Bismarck, N.D., for a medical procedure and was speaking to 911 dispatch.

The ambulance crew members were working to get Dolores out, but were initially unable to break the windows with a fire extinguisher to get to her.

“A paramedic shouted at one point they had between a minute and a minute-and-a half to get mom out.  I thought at that point it would sink totally under the broken ice as less and less of the ambulance was showing.  I did not realize at the time, but the minute to minute-and-a half warning was due to hypothermia,” said Kathy.

They were finally able to break through the window of the ambulance using a jack from Fontaine’s personal vehicle.  Fontaine cleared glass from around the ambulance windows using the jack when he got close enough to the partially submerged vehicle.  Abdual-Jabbar, insisted on going back into the ambulance with Fontaine to rescue the patient they had been transporting.

A passerby, named Woody Valdez-Perez, provided a yellow tow-rope for Fontaine and Hasan Abdual-Jabbar to help them with the rescue efforts.

Once inside the ambulance, Abdual-Jabbar looped the tow rope around Dolores.

“Mom said she was then standing in water with ice chunks up to her armpits,” said Kathy.

Abdual-Jabbar eased her out, as Fontaine and Valdez-Perez pulled her across the icy water to safety.

“The whole thing probably took about 10 minutes from the time I got there, but it seemed like much longer,” Fontaine said.

Two additional ambulances, one from Garrison, N.D., and another from New Town, N.D., and several law enforcement vehicles began arriving and all of the people that were exposed to the frigid water got into vehicles to warm up. Dolores was placed in one of ambulances and the others were checked and treated for hypothermia if necessary, with all surviving.

“I noticed about four or five vehicles as they drove by when I first got there, and I am just glad a few of us stopped to help. I am not sure how much longer Dolores would have lasted in that cold water,” said Fontaine.

"The selfless acts and quick thinking of these three (Abdual-Jabbar, Valdez-Perez and Fontaine) directly contributed to the survival of Dolores,” wrote Ward County Sherriff’s Sergeant Conrad Kossan in his accident report from the scene.

“The training I received through the military definitely helped me in this event. The command and control helped me to assess the situation and to stay calm and think through the process, and the self-aid and buddy care training helped me to come up with ways to help get Dolores to safety,” said Fontaine.

“Words cannot express my gratitude, my mother’s gratitude, as well as the gratitude of my entire family, for the brave and heroic action of Ryan, the ambulance crews, and all the passers-by who stopped to help. This truly was a total nightmare that had a very happy ending. Let it be known you are all heroes! This was one Thanksgiving we all will remember for a long, long time -- bless you all!” said Kathy Paulson.