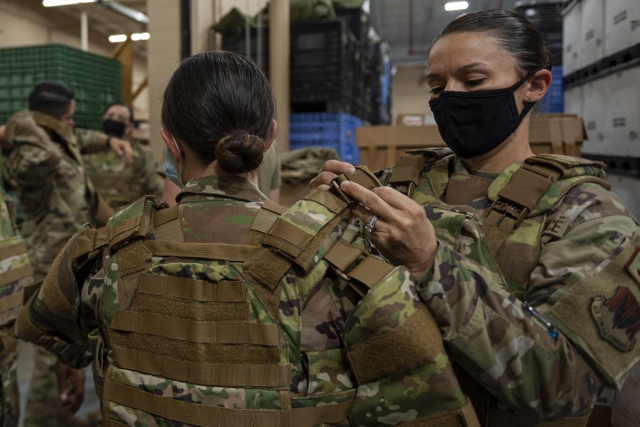 The 23d SFS, along with Minot Air Force Base, North Dakota, and Wright-Patterson Air Force Base, Ohio, received the new armor to provide more form-fitting and comfortable armor to female Airmen.

“Having the peace of mind of knowing that the equipment you’re issued is going to fit you accurately and protect you the way it should because it is made to fit your body makes women feel more mission-essential,” said Investigator Kaitlin Curtis, 23d SFS. “We’re a part of the team and we’re all here to do the same job.”

The armor has features to fit different female body shapes including a vest with an adjustable corset in the back, a shorter cut to fit females’ torsos and a shoulder cut to make it easier for women to accurately position their weapons in the shoulder pocket.

“It was nice to know that higher leadership in the Air Force listened to [our] complaints and … cared enough to want us to have [armor] that specifically fits us better,” said Curtis.

As more female Airmen became part of male-dominated career fields and deployed, leadership realized women were having more daily comfort issues than their male counterparts due to the standard vests not fitting properly. The process of creating the armor started when female Airmen voiced their concerns to flight and squadron leadership.

”[Female] Airmen brought up comfort and health issues, and we started taking a look at what we can do to fix it,” said Staff Sgt. Sean Lugar, 23d SFS NCO in charge of supply. We spoke with the Air Force Security Forces Center [Joint Base San Antonio-Lackland, Texas], and they pushed [the issues] up the chain. These particular issues got all the way up to the [Air Force chief of staff], and he decided it was important and put in the work to figure out what would be best for female Airmen.”

As an Air Combat Command base, Moody has a high deployment tempo, so the new armor was given as a solution to the problems women were facing while accomplishing the mission.

“Moody received female body armor first because they were one of three installations that were involved with the field evaluation that allowed us to get to the current solution,” said Master Sgt. Markus Nelson, Air Force Security Forces Center SF individual equipment manager. “[To show] appreciation for their assistance, we wanted to ensure Moody was one of the first units to receive female body armor.”

With the new armor, female Airmen will be able to accurately fire a rifle due to the better fit of the vest as well as run and lift their legs without the vest causing discomfort.

“The male vests hung so low on my waist that I had to take off the vest to use the restroom, leaving me more exposed,” said Curtis. “When we would go to fire our weapons, the vest was so wide on my chest that I couldn’t get the buttstock into my shoulder pocket.”

“Since the new armor was designed for a female body, [the vest] cut in more on my chest,” said Curtis. “I immediately noticed that I would be able to put the buttstock [of a rifle] into my shoulder without having any issues. Also, it didn’t bounce up and down when I ran or jumped because I was able to pull the corset in the back to make it tighter.”