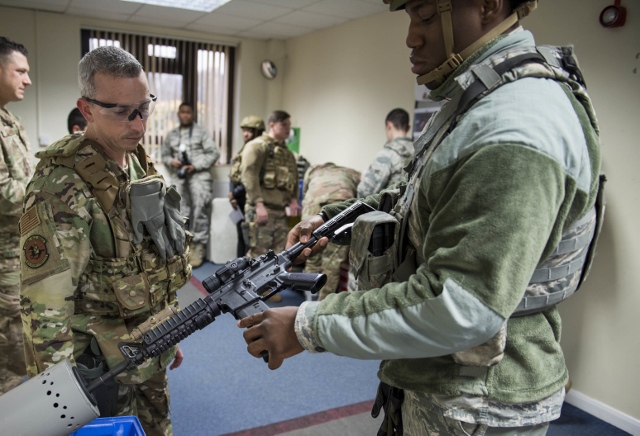 RAF Croughton is at the forefront of innovation, helping create the most effective defenders in the Air Force.

The 422nd Security Forces Squadron has been selected to undergo a six-month trial in a complete revitalization of the squadron.

Air Force Chief of Staff Gen. David L. Goldfein commissioned this idea under the Year of the Defender initiative to focus on training readiness, modernizing the force enterprise-wide and improving quality of life with eight-hour shifts. Squadron of the Future began at RAF Croughton Sept. 1, concentrating on providing defenders with more training opportunities, protected time off, and reorganizing the unit structure into a leaner, more efficient system.

“The biggest takeaway for me is the decentralized command relationship for the master sergeants, … the (noncommissioned officer) tier and down,” said Capt. Alexander Parsons, 422nd SFS operations officer. “It is really empowering those in junior-leadership levels to make decisions at the tactical level. Whereas in a traditional chain-of-command hierarchy, the decisions are elevated and made at a higher level. That is not the focus here. I want my Airmen and my NCOs to be empowered to make those decisions even at the lowest level possible. That frees up the senior leadership within the squadron to focus more on the strategic, operational and longer-term objectives.”

With the implementation of Squadron of the Future, the biggest quality-of-life improvement is that off-duty time is secured.

“We started this back in September and we have not once brought anyone in from protected time off,” Whitney said. “When the flight is on their protected time off, no one in the unit is allowed to bring someone in unless the commander approves it. It is equivalent to crew rest.”

“Previously when we had to go to training, people generally drag their feet,” said Tech. Sgt. Corey Southard, 422nd SFS noncommissioned officer in charge of training. “Now you have a trainer embedded amongst your flight. People are more receptive to it. They have someone with them who’s their trainer. It’s twofold – the quicker they train you, the quicker you get out or go off to bigger and better things.”

The Squadron of the Future concept is being tested at 14 different security forces squadrons across the Air Force, at least one in each major command. Monthly conference calls with senior leaders bring Airmen together to talk about the progress and give feedback.

“Our senior leaders at the headquarters level are really taking care of the defenders out on the ground,” Whitney said. “In 18 years, this is a whole new change, but it’s a change for the right reasons. It is making us a more lethal career field by giving us more time to do training. That’s a lot of time not only to take care of our annual training plan requirements, but it also allows us to focus on the things that may be specific to RAF Croughton. It's making us more lethal defenders, because you never know when the next threat’s going to come.”

RAF Croughton is the only test base in U.S. Air Forces in Europe – Air Forces Africa.