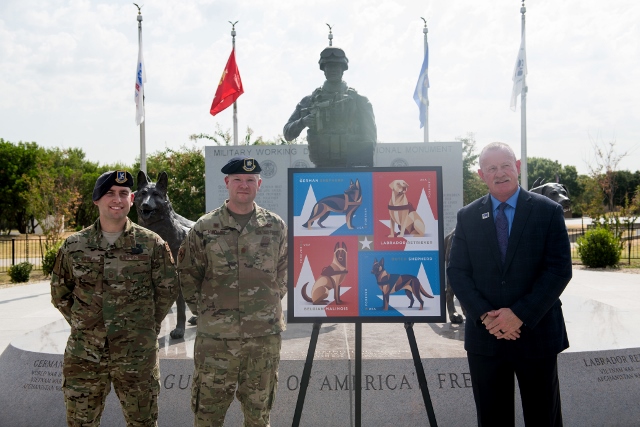 The Air Force Security Forces Center Air Force MWD Program Manager and trustee for the monument, Master Sgt. Steven Kaun, opened the ceremony saying the location was a fitting place since it was a historical site where MWD teams gather to show their respect and honor each other.

“It was my privilege to be in the 82nd Airborne in the Ranger battalion to work alongside the dog handlers and their military working dogs and see them in action in real world environments,” Carr said. “It’s amazing what these animals can do.”

The stamp honors dogs who have served in the U.S. Armed Forces over the past century, starting in World War I when dogs were originally enlisted by the Quartermaster Corps, and a diversity of breeds was accepted.

Carr said the idea of working dogs went even further back to the founding of our country and noted there’s a memo from the first Postmaster General Benjamin Franklin in the Postal Headquarters where Franklin recommended using dogs in the Armed Forces in the War of Independence because they could confound the enemy and cause distraction.

Maj. Matthew Kowalski, 341st Training Squadron commander, joined Carr and Kaun to unveil the Forever MWD stamp to the applause and barking of attendees, which included current MWDs and puppies from the Defense Department Breeding Program.

Working with their handlers, military working dogs are called upon to deter and detect. They are trained in narcotics, explosives and intruder detection, and those duties often place them in harm’s way.

The Military Working Dog Teams National Monument is a U.S. National Monument that represents all handlers, dogs and veterinary support from all military service branches. The monument grounds include a 3,000 square foot granite plaza, granite pedestals, granite history wall, granite benches and water fountain. The granite pedestals have large bronze statues of dogs and handlers. One of the inscriptions reads: “Dedicated to all U.S. Military Working Dog Handlers and their beloved dogs who defend America from harm, defeat the enemy, and save lives.”