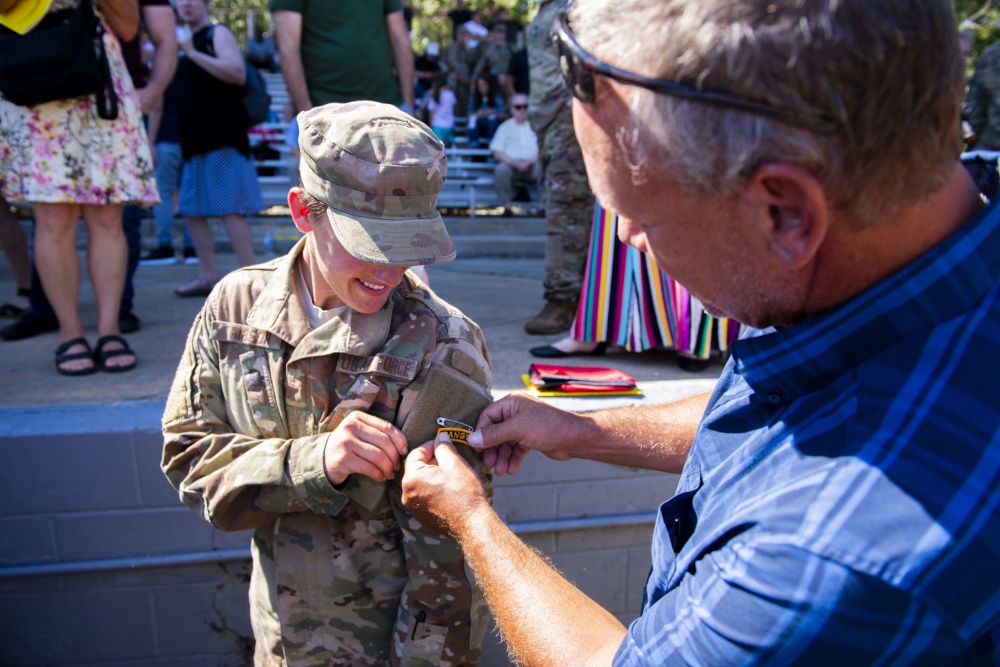 Hibsch is a security forces officer assigned to the 821st Contingency Response Squadron at Travis Air Force Base, California.

Becoming a Ranger is no easy task. The two-month grueling course is designed to train military members on small unit tactics and instill combat leadership skills that empower members to make quick decisions in adverse situations.

“Lt. Hibsch represents the very best of our Air Force and Air Mobility Command – determined, innovative, and capable of breaking barriers,” said Col. Doug Jackson, 621st Contingency Response Wing commander. “Moreover, as evidenced by her completion of this rigorous training, she exhibits steadfast commitment to joint teams and partnerships. The entire 621st Contingency Response Wing is proud of Chelsey and her remarkable accomplishment.”

“These are the key tasks and skills we need to have confidence in as security forces members,” Hibsch said during an interview for the ACSA competition. “You’re going to fall back on the level of your training and this just goes to show how good our squadron’s been about training.”

Her dedication, teamwork and Airmanship pushed her to compete in the Ranger Assessment Course at Camp Bullis, Texas, which ultimately led her to enroll in the U.S. Army Ranger School.

According to the U.S. Army’s Maneuver Center of Excellence, there are three distinct phases of Ranger School, called the Benning, Mountain and Swamp, which follow the crawl, walk and run training methodology.

In the Benning phase, students are assessed for physical stamina and mental toughness. It also establishes the tactical fundamentals required to become trained on squad operations and focus on ambush and recon missions, patrol base operations, and planning before moving on to platoon operations.

During Mountain phase, students receive instruction on military mountaineering tasks as well as techniques for employing squads and platoons for continuous combat patrol operation in a mountainous environment. The rugged terrain, severe weather, hunger, mental and physical fatigue and the emotional stress that students encounter afford them the opportunity to gauge their capabilities and limitations as well as those of their Ranger buddies.

Hibsch is now one of the few elite females in the military who get to wear the coveted Ranger tab.

Capt. Alex Covey, 921st Contingency Response Squadron Defense Force commander, praised Hibsch for successfully completing Ranger School and said she will be a significant and positive addition, not only for the squadron, but for the Wing as a whole.

“The firsthand knowledge and tactical experience she is bringing back to her squadron will improve the way Security Forces develops and executes integrated base defense in support of Air Base Openings and Joint Task Force-Port Opening contingency operations,” Covey said. “I believe that Lt Hibsch’s specific training will bring both 821st and 921st Defenders to new heights as we continue to forward posture to deter and defeat future threats involving Contingency Response Airmen.”

“This is a big moment for Lt Hibsch and her family,” said Lee. “Graduating Ranger School is an accomplishment that stands on its own. In Chelsey’s case, there’s more to the story that we should be unabashed about celebrating. Her place in history as the first Air Force female to graduate marks a positive culture change. She paves the way for what I know will be many more ahead. Our Squadron slogan is “Lead the Rest.” She lives those words in a way that makes all of us humble and proud. We look forward to having her home and back with her team of Contingency Response Airmen.”