CMSAF #5 and AFSFA member Bob Gaylor visited SSgt Nelson, his wife TSgt (sel) Anna Nelson (both Defenders) and his mom Jeannie on 6 February. His dad Chris told us Bryan plans to be a Chief someday so what better visit could an aspiring NCO have than a CMSAF who was a Defender? Chief Gaylor presented Bryan one of his autographed CMSAF sweatshirts and spent some time visiting. If you have never heard how Chief Gaylor became a cop you'all have to ask ... it is a super story. His mom passed along her gratitude to AFSFA, "... your support means the world to us." 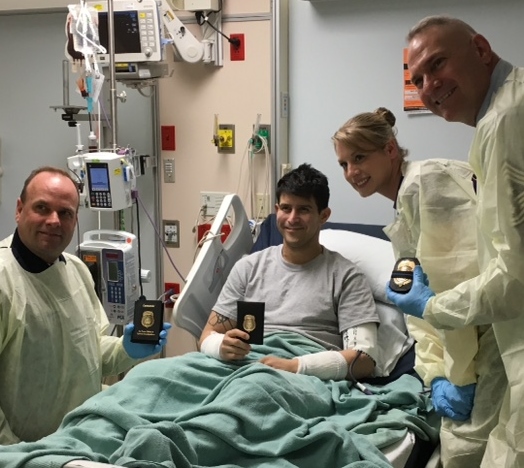 On 5 January 2016 BGen Keith M. Givens presented OSI credentials to Security Forces SSgt Bryan A. Nelson at the San Antonio Military Medical Center. SSgt  Nelson is the only active duty Defender to ever receive this distinction.

AFSFA had a great visit with SSgt Bryan Nelson and his family on New Years Eve. SSgt Nelson, a member of the 820th Security Forces Group, Moody AFB, GA, was transported to the San Antonio Area Medical Center (SAAMC) burn unit due to burns and injuries suffered during the recent motorcycle bomb attack at Bagram Air Base this last December which killed 4 AFOSI agents and 2 Security Forces Defenders. He received burns to his lower body, back and some to his face with a broken leg and ankle. He is doing very well for his condition. His wife, TSgt (sel) Anastasia Nelson, also a Defender, was at the hospital with his father during the visit. His mother and grandmother arrived as SSgt Nelson’s wife and sister departed. Bryan was born and raised in San Antonio and both he and his wife had upcoming assignments to the Lackland AFB, TX for 2016. The AF is working to accelerate their moves now that they are already in the San Antonio area.

All were very appreciative of the concern and support offered by AFSFA and our Proud Warrior Program. In addition to the $500 Proud Warrior Program grant Lee Chambers of the Eagle Chapter reached out to other chapters including the Oklahoma Heartland and Magwood Chapters to increase the support. Their combined donations produced an additional $300 grant.

AFSFA also provided copies of the last 6 magazines, travel mugs, AFSFA and Fallen Defender coins and an AFSFA tote and get well cards.

AFSFA will continue to provide updates on SSgt Nelson’s recovery.