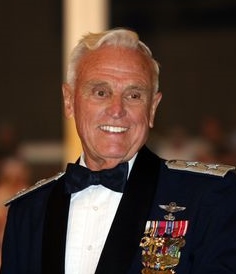 MGen (Ret) Thomas M Sadler passed away in Mount  Pleasant, North Carolina, on 7 Sep 2015, at the age of 90. When he retired in 1983 he was the last general officer who served in World War II. At the time of his retirement, he was the commander, 21st Air Force, Air Mobility Command (AMC), one of the three numbered air forces under the command of AMC.

He also had the distinction of being the first Director of Security to wear a star since 1955. He brought with him a new sense of respect for the Air Force security policeman. He was the man of the hour, bringing us out of three decades of being called a “soft core” career field.

To the Defender in today’s Air Force one needs only to look around and see what Gen Sadler brought to the game. Police cars have replaced pickup trucks. We wear distinctive uniforms, the bond of the beret. Our training is the best it has ever been.

The Air Force Chief of Staff, Gen David C Jones, selected the General for the job. He came to us with the directive and the authority to bring order and professionalism into the Air Force Security Police career field. With the new job came a second star.

With his senior enlisted advisor, CMSgt Howard Redd, he traveled extensively, visiting all of the major Air Force bases. Wing commanders quickly recognized they were, in fact, dealing with a six-star general, for in addition to his two stars be carried the authority of General Jones’ four stars. He often left the base in a flurry of activity to improve lives of the troops.

Like all great commanders, his heart was with the troops.  Wherever he went he spent his time with the Airmen.