More than 1,000 people attended a memorial service on base today to honor and remember two Hanscom Airmen killed earlier this month when the C-130J Super Hercules aircraft they were on crashed shortly after takeoff from Jalalabad, Afghanistan.

During the service, colleagues took time to remember them personally.

“If you were blessed to be his friend, then you had an incredible person in your life, one who leaves us with a legacy we will never forget,” said Staff Sgt Lee Shortell during his remarks on Sartain.

Shortell, who was Sartain’s supervisor, added that there were very few people he knew “whose focus on the mission and pride in their work came anywhere close to Sartain’s.”

Staff Sgt Derek Smiling, who spoke about Ruiz on behalf of Tech Sgt Matthew Marquart, said she was an “amazing troop.”

“Kcey Ruiz, you were not only my troop, my sisterin-arms, but you were my friend and you are my hero,” Smiling read. “I can proudly say, Kcey, you changed me. She made me a better person, changed the way that I am as an NCO, as a supervisor and as a human being.”

Also recalling the two Airmen was the installation commander.

“These two defenders embodied the character, honor, dedication and sacrifice of true heroes,” said Col Michael A. Vogel, installation commander. “I could not be more proud and humbled to stand here today as Nate’s and Kcey’s base commander.”

Ruiz and Sartain were deployed to the 455th Air Expeditionary Wing in Afghanistan as Fly Away Security Team members as part of Operation Freedom’s Sentinel.

At their home station here, both were installation entry controllers and also armorers.

“On behalf of all the men and women of the 66th Security Forces Squadron, I can tell you how proud we all are of Kcey and Nathan’s exemplary service, friendship and defender kinship,” said Maj Joseph Bincarousky, 66th Security Forces Squadron commander, to the families of the fallen Airmen. “They will always be a part of this family, and your families will always have a place in our hearts. 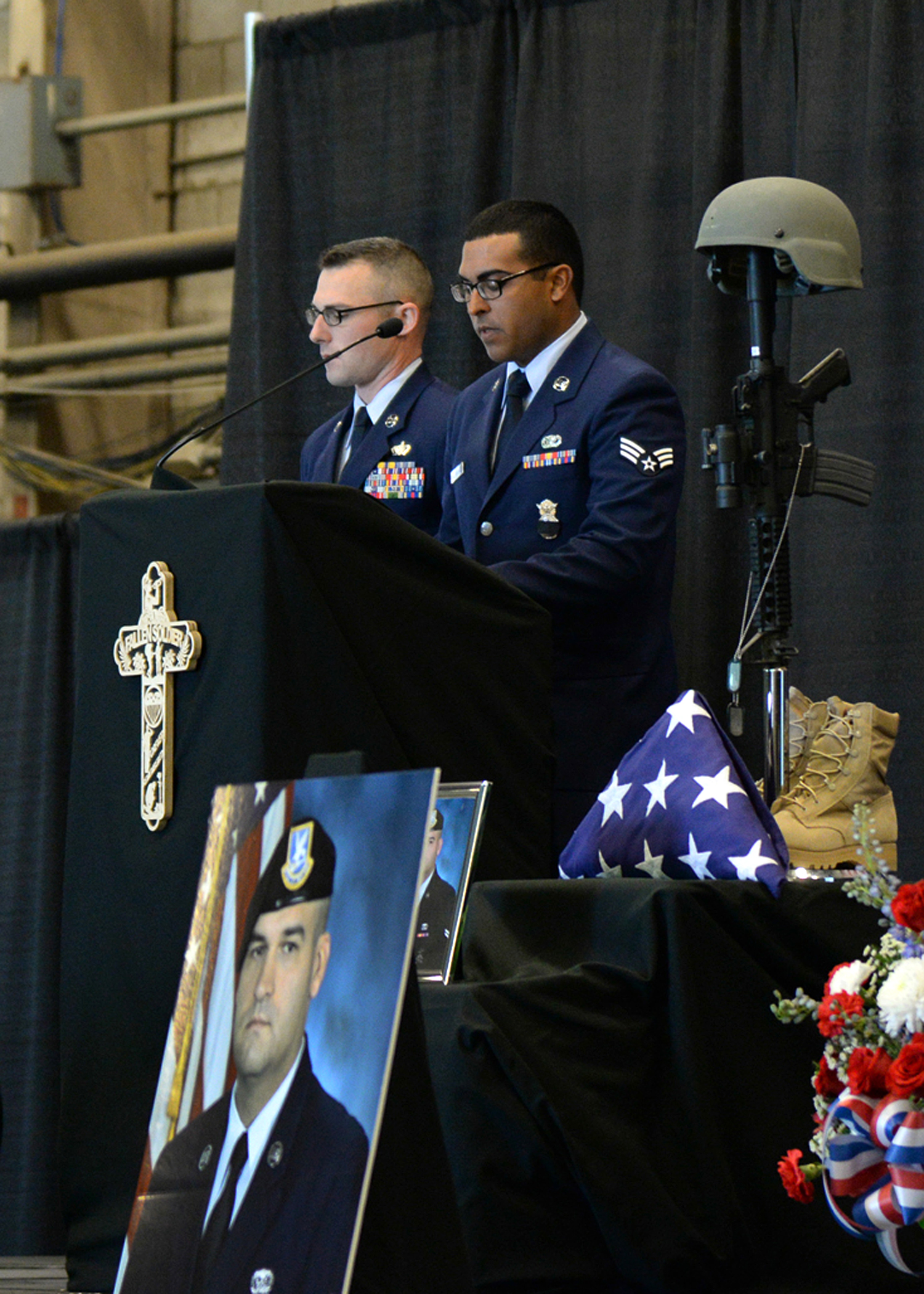 The Voices of Hanscom, from left to right, Michael Fields, Stacey Jones, Maj. Catherine Tobin and Andie Avram, perform the National Anthem on stage during a Memorial Service at the Aero Club Hangar Oct. 16. The Memorial Service was held to honor and remember Senior Airman Nathan Sartain and Senior Airman Kcey Ruiz, who were killed Oct. 2 when the C-130J Super Hercules aircraft they were on crashed shortly after take-off from Jalalabad, Afghanistan. (U.S. Air Force photo by Linda LaBonte Britt)

Ruiz was born July 9, 1994. Her military career began April 16, 2013, with her enlistment in the U.S. Air Force as a security forces specialist. She is survived by her mother, Kyhia Ruiz; father, Michael Ruiz; and sister, Maya Ruiz.

The Airmen were also posthumously presented the Air Force Commendation Medal by the 66 SFS commander.

The message, “Honoring our Heroes, Healing our Hearts,” was provided by Chaplain (Capt) Jerry St. Pierre.

“The loss of our heroes has helped us to put life in its proper perspective,” he said. “The news of Senior Airman Sartain and Senior Airman Ruiz’s passing struck at the soul of Hanscom Air Force Base.”

Vogel extended his thanks to the community for the tremendous amount of support the base has received.

“The outpouring of love and support from across the nation, our Air Force family and the local community has been humbling, encouraging and deeply touching,” he said.

Among the local dignitaries on hand were Massachusetts Governor Charlie Baker, Lt. Gov. Karyn Polito, Massachusetts Department of Veterans’ Services Secretary Francisco Urena, U.S. Congresswoman Katherine Clark and representatives from other members of the congressional delegation along with local selectmen.

Members of the U.S. Air Force Band provided a musical prelude and postlude and the Irish American Police Officers Association Pipe and Drum Band played “Amazing Grace.” Vogel vowed to continue to honor the Airmen’s memory by completing the mission.

“We will not falter, we will succeed,” he said. “And we will always remember our two fallen heroes and those who loved them.”

The SFS commander closed his comments by committing to carry on the security forces mission.

“We must always defend that which is worth defending, and those who are in need of defending,” he said. “And we will take the reins and slack in your absence, and continue to drive the mission home.”

Added Note: AFSFA was present at the memorial service and provided the surviving family members a mounted beret and Fallen Defender coins. The family and unit members have also been provided copies of the current AFSFA Security Forces Magazine. AFSFA is currently preparing black granite plaques for the unit to display.