Hardware, Software, Training Reshaped as Part of ‘Year of the Defender’ Initiative

Hardware, Software, Training Reshaped as Part of ‘Year of the Defender’ Initiative

The Air Force has undertaken a comprehensive effort to revitalize and reconfigure its security forces squadrons during the past year with the Reconstitute Defender Initiative. 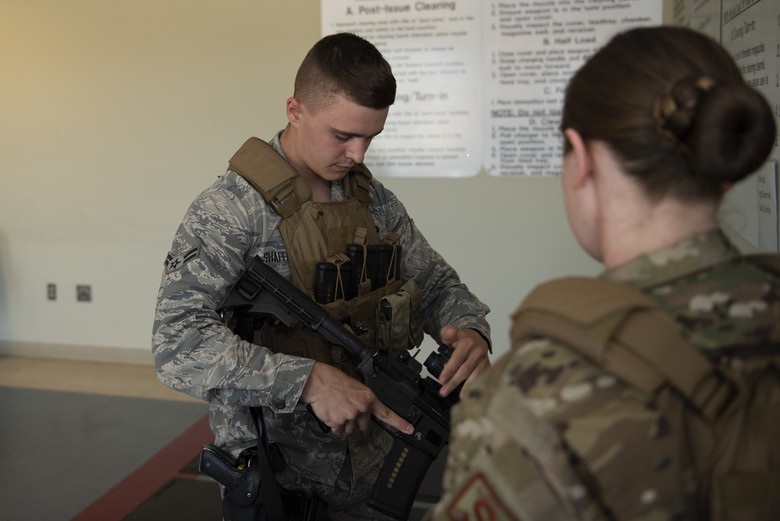 Travis Air Force Base is no exception. The initial push is 2019's "Year of the Defender," something Master Sgt. Joshua Wells, 60th Security Forces Squadron noncommissioned officer in charge of operations, said aims to adapt, update and evolve the unit's approach on many fronts, from the digital realm to Airmen's practical, day-to-day mission.

"It's meeting a need that the Air Force has in our career field to revive development for our people," Wells said. "They're taking the initiative here on the ground to foresee the needs that are being directed from up top."

"We must always take integrated and layered base defense to a new level by increasing investment in our defenders with new equipment, new training, new tactics, techniques and procedures, and renewed focus at every echelon of command," said Air Force Chief of Staff Gen. David L. Goldfein. "This is the Year of the Defender because we don’t project power without the network of bases and infrastructure needed to execute multi-domain operations."

What that means on the ground at Travis AFB is a bevy of changes, including modernizing tactics and training. One example is the discontinuation of career development courses in favor of on-the-job training. Wells said CDCs felt more like homework and prepared Airmen to answer a question in a book, but didn't necessarily deliver the practical knowledge needed to accomplish the mission.

"Now these guys have to sit in a car or out on a post or after shift or before shift with their troop, look at the training outline, go through the objectives, evaluate them and then document that they did it," Wells said. "Our career field requires you to talk with other people. You can't be great at a book and not be great with people in our career field and be successful."

Changing, too, is the content as well as the intervals of training courses. Pre-deployment training previously packaged all ranks into one training session each time they prepared to depart. Now, Wells said, enlisted Airmen are grouped by rank into one of four tiers for a training session at Fort Bliss, Texas, that certifies each Airman for a four-year period.

Wells said the demands of the mission, which sent many defenders to deployed locations on a regular basis, created gaps in the training and experience needed to deploy.

"Some of our law enforcement training and resources were falling by the wayside," he said. "They had to balance that out and I think that one of the initiatives here is to find that healthy balance to make us a lethal and diverse career field."

Other changes come in the digital realm. Booking stations and, specifically, the processing of fingerprints were overhauled. Gone for fingerprinting is a system that relied on ink on cards sent through the mail to a central location for processing. In its place is a digital scanner that electronically submits data straight to an FBI database.

"It's a huge improvement in how we do law enforcement and how we do criminal case reporting," Wells said.

Travis AFB is also a beta-test site for new case-management software, which seeks to improve the flow of incident reporting and the sharing of information between bases and agencies.

Year of the Defender initiatives are not confined to software and training, however. An Air Force-wide initiative involves new standard duty weapons, replacing the M9 Beretta, a 9 mm pistol, with the M18 SIG Sauer Modular Handgun System. All security forces units are expected to receive their full complement of M18s by 2020.

Wells said, that although the year of the defender and RDI are specific to security forces, they're part of a larger picture when it comes to the mission of the base and the service.

"We're the subject-matter experts because we do defense all day, every day," he said. "But when we get those other people in there, they have some fundamentals that we can apply to the overall defense plan … every Airman is a defender, essentially."