Military working dogs, the beloved canines who have saved countless of troops on the battlefield, will soon have their own commendation.

Menendez announced the passage of the legislation on Tuesday at the U.S. War Dog memorial in Holmdel, New Jersey. The award, included in the latest defense authorization act, will be official when President Trump signs the NDAA, something he’s expected to do in the coming days.

The legislation will allow each service to establish its own criteria for the award, Menendez said, according to the New York Times. Each service also will design its own version of the award.

“These dogs endure multiple tours of duty. Some come back having lost limbs and others give their lives in service to their teams,” Menendez said, according to the New York Times. “Yet until now the U.S. military did not recognize the incredible service and sacrifice of working dogs and their handlers.” 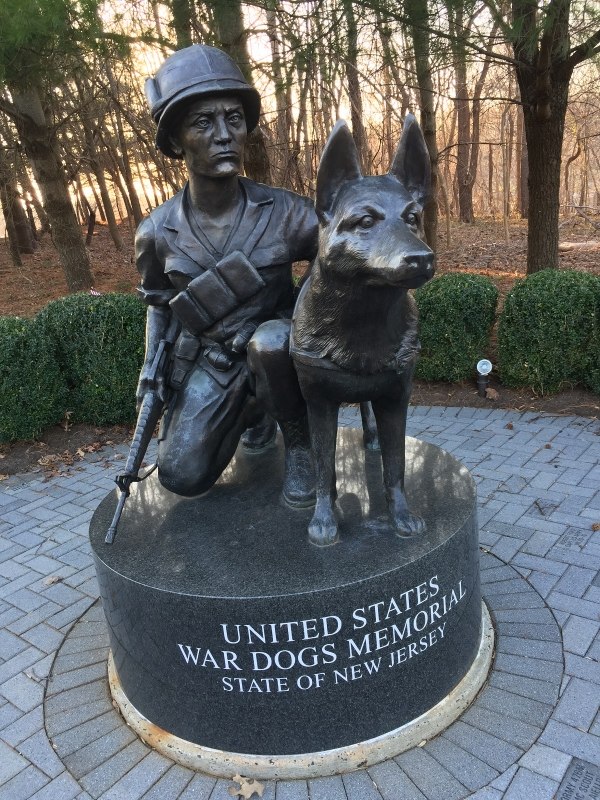 The military's first official commendation for military working dogs and their handlers is about to become official. The U.S. War Dog memorial in New Jersey is shown here. (Wikimedia Commons)

The U.S. War Dog memorial, where Menendez made the announcement, features a bronze statue of a Vietnam War soldier kneeling next to his loyal canine companion. The memorial was built in 2006 next to the New Jersey Vietnam Veterans Memorial.

According to the New York Times, several hundred dogs are currently deployed to the Middle East.

Menendez, who cited the life-saving exploits of several working dogs and their handlers who attended Tuesday’s announcement, said there’s no reason why military dogs should be treated as just equipment or animals.

“If we as a nation can strap a Kevlar vest on Cairo and send him on a mission with SEAL Team 6, or we can deploy dogs like Kira or Khrusty or Rudy to dangerous regions around the world, then I think they deserve more than treats and a pat on the head,” he said.

The new measure is a significant change of pace from the way military dogs were considered at the time of the Vietnam War. According to the New York Times, dogs were often considered to be “equipment” and that many were euthanized or given away to the Vietnamese at the end of their service.

“Honoring [the dogs'] service — as well as their partner — I think is incredibly important. You know, we have lost a lot of dogs along the way who gave their lives ... others have been maimed for life,” the senator said. “At the end of the day, I think it’s the least a grateful nation can do for them and for their handlers.”