One of Tinker Air Force Base’s 72nd Security Forces Squadron K9 team members, Aruba, a German shepherd, age 4, recently suffered a chipped tooth during a Military Working Dog demonstration after he was commanded to attack a man wearing a bite suit on May 29.

Military Working Dog Aruba, a four-year-old German shepherd, relaxes outside of the surgery suite in the vet clinic before his procedure to have a new crown fitted to one of his canine teeth. (U.S. Air Force photo/Kelly White)

Aruba’s handler, Airman 1st Class Marco Arroyo, said he and Aruba were doing bite work on controlled aggression training when one of his dog’s canine teeth broke off. Despite his injury, Aruba kept working.

“I heard a break, like a stick snapping, and saw his tooth fly in the air, but he didn’t give up,” Arroyo said. “I had to take him off because he was still biting. He’s one of the youngest dogs, very energetic and hungry to learn, but I was very concerned.”

Fortunately, Veterinarian Dr. Heather Cameron was in the audience along with visiting U.S. Army Lt. Col. Sidney M. Cobb Jr. Once Arroyo saw that his MWD’s tooth was bleeding, they immediately took Aruba to the vet clinic so Cameron could examine him. She provided pain management to make him comfortable for the night, and took X-ray images the next day.

Upon examining the X-rays, Cameron discovered Aruba needed a root canal. She then called U.S. Air Force Comprehensive Dentist Maj. (Dr.) Heather Brooks with the 72nd Dental Squadron, to see if she was interested in performing the procedure

“We don’t usually do root canals or crowns, but we discovered we could save a good chunk of the root — the actual part of the tooth that sits on the gum line,” Cameron said. “That’s always a better option for a Military Working Dog because it helps him maintain that bone as he ages, and Aruba’s only 4 and has a good, long working life ahead of him in the future. We’ve worked with Maj. Brooks and the 72nd Dental Squadron before and they’ve been very helpful and willing to help us out. 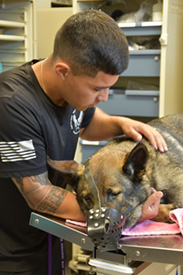 “Dr. Brooks has a lot more experience on root canals than I do because they do them every day. The last one I did was four years ago, so if she was willing to do it, I’d rather have that quality of care for my Military Working Dogs.”

Brooks said she was thrilled to have the opportunity. She had actually saved a lecture she had heard five years before about performing root canals on the military’s canine warriors.

“It’s a good thing I’m a hoarder,” Brooks said, laughing. “I kept all those lectures. The irony was, I was briefed during my first residency at Travis Air Force Base and you never know you might get the opportunity to do this. I really studied up!”

Brooks said the biggest difference between dog and human teeth is that dog’s teeth, especially canine teeth, are significantly longer and the curvature is different. Cameron, Brooks and both vet clinic and 72nd DS staff assisted with the root canal. Aruba received a kiss from Arroyo, then anesthesia and Brooks got busy. The operation lasted more than two hours.

“Aruba had a deep break, so we had to do a little bit of dental heroics,” Brooks said. “We don’t have dental trays for dogs, so we created an impression tray and made a putty mold of his teeth. Aruba’s canine teeth are huge at 3.5 centimeters long, so we had some MacGyver moments, because while they had some of the equipment we needed, human dental instruments aren’t large enough for a dog’s tooth.

“In a perfect world I would have post drills for dogs, but we just had human drills so we did the best we could. We took out the nerve, cleaned it out and disinfected the tooth, put the filler in and sealed it and irrigated the area.”

Because of the way Aruba’s tooth broke, Brooks decided to create a crown with a post, primarily because she didn’t want the dog to be sedated three times. On June 18, the team reconvened and inserted Aruba’s new crown. It is silver and made of high noble metal alloy.

Brooks described Aruba as “adorable” and said she enjoyed watching him do laps with Arroyo. She and the team also took photos of Aruba and his handler.

Arroyo said he found the root canal process interesting and felt confident that Aruba was in good hands.

“It was cool watching the root canal and going through the process and learning how everything works,” he said. “It was pretty exciting and the best thing I got out of that was when he woke up and was fine. It felt nice seeing him getting fixed up like that because he’s like my child.”

Arroyo said on June 26 that Aruba is doing great after his follow-up visit.

“He’s ready to rock and roll, he’s good to bite and to get back to work,” he said